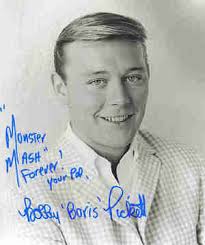 In real life, “Boris” certainly did not look too scary…

This nightmarish 2020 may have a less-than-festive Halloween in store for us, but we can always look back on more carefree October 31s – and usually the seasonal soundtrack for such occasions was “Monster Mash,” the 1962 smash hit novelty record by Bobby “Boris” Pickett and The Crypt-Kickers.

In real life, “Boris” certainly did not look too scary…

As the 1960s dawned Pickett had taken to adding impromptu impressions of horror film star Boris Karloff to sets by his vocal group the Cordials. The gag was well-received by audiences, and Pickett’s bandmate Lenny Capizzi thought they might be on to something worth tightening into a novelty song. The early 1960s was the golden era of classic horror and monster films, and their popularity seemed ripe for musical exploitation. The two men started putting pen to paper and soon had devised “Monster Mash.”

Interestingly, renowned studio hound Leon Russell was on hand for the Hollywood sessions that resulted in “Monster Mash,” rocking the 88s on both the soon-to-be hit and on the original single flip-side, “Monster Mash Party.” The single’s a-side was wildly popular upon release, debuting on the Billboard charts on September 8, 1962. Within eight weeks it had clawed its way to number one – although in England, the BBC briefly banned the song for its perceived morbidity. The popularity of “Monster Mash” is enduring, the song having been covered over the decades by bands ranging from the Beach Boys to the Misfits. 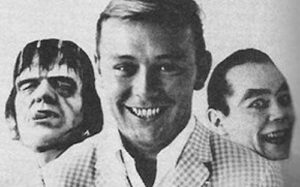 In my own music career, I’ve had some bandmates who resemble Bobby’s sidemen!

I recently saw another music writer make a most perceptive comment about “Monster Mash” – that it’s a song about a song. Yes, there’s no question there’s a dance element to it, but check out the lead-in to the third chorus and that chorus itself:

The coffin-bangers were about to arrive
With their vocal group, ‘The Crypt-Kicker Five’

So, it is most definitely a song. The sad thing about it? None of us will ever know what that song sounds like. Alas!