It’s certainly debatable whether the new Jimi Hendrix Experience: Paris 67 is worthy of chapter status in the realm of Modern Listener Guide: Jimi Hendrix. After all, the content of this vinyl-only title – bearing songs extracted from an original two-track recording made 55 years ago for French radio – has been previously released officially in its entirety across two earlier releases. And since this is a Record Store Day special item, any modern listeners seeking to hear this album had to make a dedicated effort to track down a copy, either by high-tailing it to an actual record store beginning on the November 26 day of sale or – more likely – arranging a later purchase via eBay or Discogs.

Then again, 2021 has stretched like a vast wasteland in the context of new Jimi Hendrix music, so this album must be considered slightly better than nothing. But only slightly. After all, if you’re a dedicated Hendrix fan this is just an opportunity to re-purchase music you’ve had in your official release collection for almost two decades. 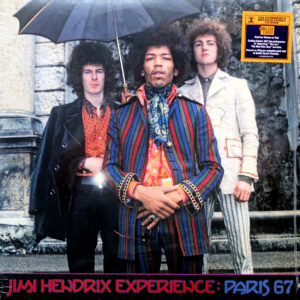 But before we proceed further, as always let me outline the ground rules for the free chapter you are reading: this online material acts as a supplement to the print and e-book editions of Modern Listener Guide: Jimi Hendrix. Therefore, it’s less formal and more conversational than what you’ll find should you purchase (which I surely hope you will) one of the available editions, which cover decades of Jimi Hendrix’s music within their pages. For a free taste of that published material, take a read through the chapter covering Jimi Hendrix’s creative uneasiness in the weeks leading up to his 1969 Woodstock performance, and an analysis of the historic performance he then unleashed at the festival:

So, what’s to be said about Jimi Hendrix Experience: Paris 67, recorded on October 9, 1967, well over two years before Woodstock?

The talk can begin with the curious cover art for this album. The large color portrait of the Jimi Hendrix Experience on the front and the four on-the-road photos on the back have nothing to do with Paris, or even France. Instead, for reasons only they know, Experience Hendrix has chosen to illustrate a Paris gig with images of the band in Germany.

Everything old isn’t really new again. The entire content of Jimi Hendrix Experience Paris ’67 appears on these two releases from Experience Hendrix issued way back in 2000 and 2003.

Musically, we start with two tracks played that night at the Olympia extracted from 2000’s massive purple box set The Jimi Hendrix Experience, “The Wind Cries Mary” and “Catfish Blues.” This pair is reunited with seven other songs from this concert, yielding most (key word, that one is) of the set played by the Experience that evening. These seven tracks were released on the rather awkward-titled 2003 Dagger Records release Paris 1967/San Francisco 1968. Still missing in action from the show in question? An incendiary “Foxy Lady” as first heard decades ago on bootleg label Whoopy Cat’s Live in Paris 66 & 67, as well as an early live run-through of “The Burning of the Midnight Lamp.” Both songs remain mired deep in the Experience Hendrix burial vault due to supposed technical faults (Experience Hendrix’s go-to excuse for not releasing various tracks over the decades). “Foxy Lady” was declared to be unusable due to microphone failures by Experience Hendrix’s John McDermott in his liner notes to Paris 1967/San Francisco 1968 but the song oddly sounds just fine in bootleg form. No recordings of the other song have yet emerged. One might think that since the new 2021 Paris album is being released on the “official bootleg” label of Experience Hendrix – Dagger Records – that any tracks with technical flaws would be acceptable. Obviously, such thinking would be incorrect.

Nevertheless, in the end, your running order on this 2021 album finds side one made up of “Stone Free,” “Hey Joe,” “Fire,” “Catfish Blues,” and “The Wind Cries Mary.” The second side kicks off with “Rock Me Baby,” followed by “Red House,” “Purple Haze,” and “Wild Thing.” The missing “The Burning of the Midnight Lamp” and “Foxy Lady” were played by Jimi in that order after “Catfish Blues.”

Over the years we have seen Experience Hendrix repeatedly recycle material through various releases, and Jimi Hendrix Experience: Paris 67 is yet another example. But two can play at that game. What follows is recycled from the text of Modern Listener Guide: Jimi Hendrix reviewing the bulk of these Paris tracks. After all, if you’re not familiar with my book here’s another good way for you to get a glimpse at the kind of analysis to be found in the pages of Modern Listener Guide: Jimi Hendrix (and don’t forget the free sample chapter also available here on the website, as mentioned earlier). Mentions of Stockholm in this review refer to the 1967 Swedish gig included on the Stages box set, a show reviewed in this same chapter.

After the somewhat low-key mood exhibited by Jimi during the Swedish broadcast on Stages – Stockholm 67, it’s refreshing to find Hendrix positively buoyant at the Olympia Theater on October 9, 1967, feeding off the energy of an enthusiastic, noisy crowd. In fact, the whole band picks up on it right from the opener, a rollicking “Stone Free” that tears full-speed-ahead into its solo section, Hendrix building tension with a lengthy passage of string bend-and-release notes.

With this concert being recorded for broadcast on French radio, Jimi then decides to greet everyone with, “Viva France, right?” and a fierce “Hey Joe” intro. Hendrix is in great spirits, full of little jokes and quick asides, counting in a propulsive “Fire” with a laugh.

Moving on to “Rock Me Baby,” the band cruises at a slightly mellower pace than the warp-speed pass undertaken at Monterey. But that pacing works well, effectively setting up a roller coaster ride of tremolo bar dives at the song’s conclusion.

The Experience then slow the set further, dropping into a lower gear for the blues of “Red House.” This blues is rough but right, the middle section of the solo finding Jimi soaring above as Mitch takes rhythmic liberties with the song’s pulse, leaving Noel to anchor the flow. It’s a compact and effective take.

Noel jokes about having a “freak in” rather than freak out as he helps Jimi introduce “Purple Haze,” but it’s the freak out that eventually takes over. Hendrix’s ascending, freeform tone poem leads up to a headlong charge into the song proper.

The set ends with “Wild Thing,” Jimi commanding, “Everybody sing!” And the song is chaotic as always, the point in early Experience shows when tuning was less important than sheets of sound conveyed by those simple, elemental chords.

Add to that review the box set versions of “Catfish Blues” and “The Wind Cries Mary” mentioned earlier and you have the 2021 lineup found on Jimi Hendrix Experience: Paris 67. One item of note: this album’s multi-color vinyl is pressed by Quality Record Pressings for the United States side of the Atlantic, while European editions are pressed by Pallas in Germany in a solid purple color. 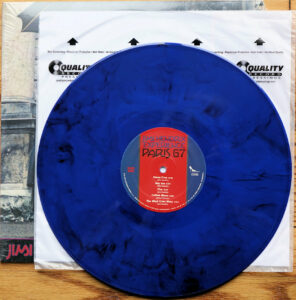 Regardless, the bottom line in unavoidable: this is not exactly a thrilling release, colorful vinyl aside.

In the months ahead, let’s hope Experience Hendrix awake from their slumbers and get back to the work of releasing Jimi Hendrix music. It has always come at a typically glacial pace, to the endless frustration of Jimi’s most loyal fans. In the pages of Modern Listener Guide: Jimi Hendrix I addressed this issue, and as long as I’m recycling one part of the book I might as well add this here as well:

Experience Hendrix is facing a dilemma. They seem determined to put out Jimi Hendrix albums they envision having the potential to be commercial hits. That appears to be an unrealistic expectation in the modern marketplace. Yet there is a significant market that would leap at the opportunity to join a collector’s subscription service. Why not offer this market “fly on the wall” releases documenting the studio sessions of songs like “Voodoo Child (Slight Return),” where Hendrix starts with the spark of an idea and ends up with a fully realized creation? At the least a revitalized Dagger Records would be welcome, letting that collector label treat the oeuvre of Jimi Hendrix as other curators handle the realms of Elvis Presley, John Coltrane, and Frank Sinatra, not to mention Hendrix’s Sony Music/Legacy labelmates Miles Davis and Bob Dylan. The latter two in particular have benefitted from imaginative and deliberate curation of their bodies of work.

In heralding this retread of a release of the 1967 French material, Experience Hendrix declared in a 2021 press release that this album is the “most complete official release of the October 9, 1967 set to date.” Cynical Hendrix fans can be excused for seeing this “to date” qualifier as a cracked-open window for a potential future release that will add the two missing songs to the nine gathered on Jimi Hendrix Experience: Paris 67, thus resulting in a truly complete concert. 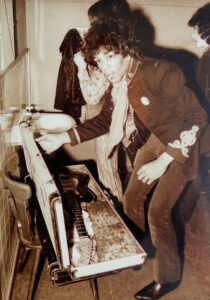 Jimi prepares for battle in a rear cover photograph featured on the Jimi Hendrix Experience Paris ’67 cover. Inexplicably, Experience Hendrix decided not to use photos of the actual October 9, 1967, performance, instead opting for four unrelated photographs of Jimi and the Experience on the road in Germany. (Friedhelm Von Estorff/Authentic Hendrix LLC)

In the end, this may seem to be something of a lackluster chapter. Yet your poor author can only work with what he’s given. Someone not familiar with the Hendrix realm might survey the material released over the years and the current drought and conclude, “Well, maybe they’ve released everything worth hearing?” But of course, we know for a fact that is not true. So, we wait – and hope that next year perhaps Experience Hendrix will shift their focus from marketing flashy gewgaws, gadgets, and clothing and return their attention to the music of Jimi Hendrix. 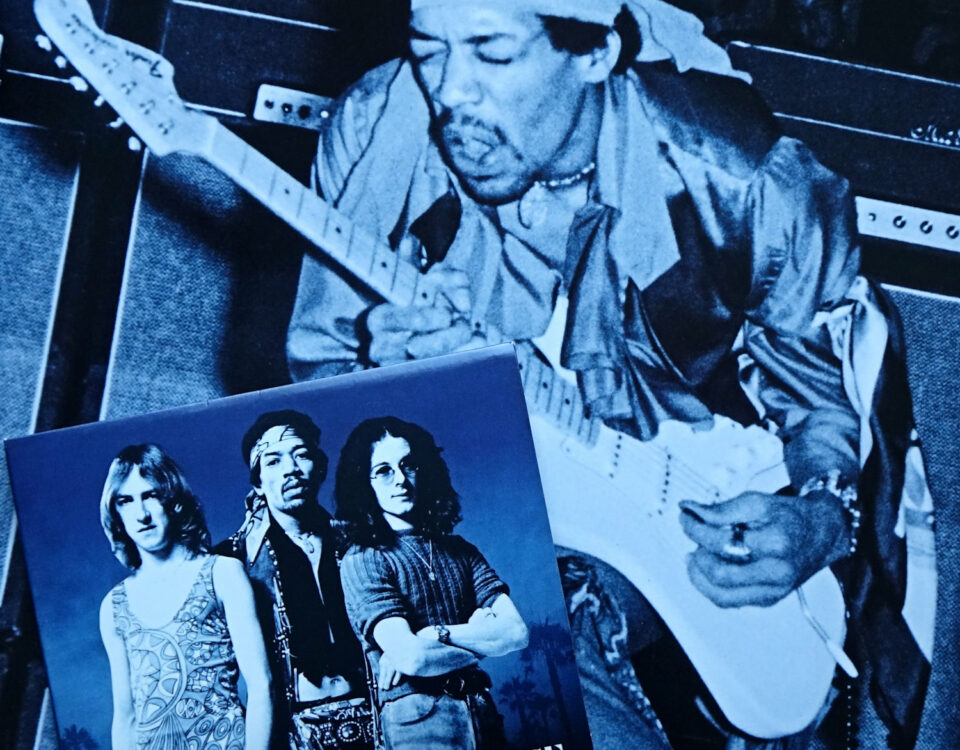 CHAPTER TWENTY-SIX: YET ANOTHER SLIGHT RETURN

The CD and LP editions of Live in Maui both share the same colorful imagery, although a close look at the cover photograph reveals Jimi’s amplification has been reduced by one-half a speaker cabinet and one Marshall amp head via an airbrush effect. 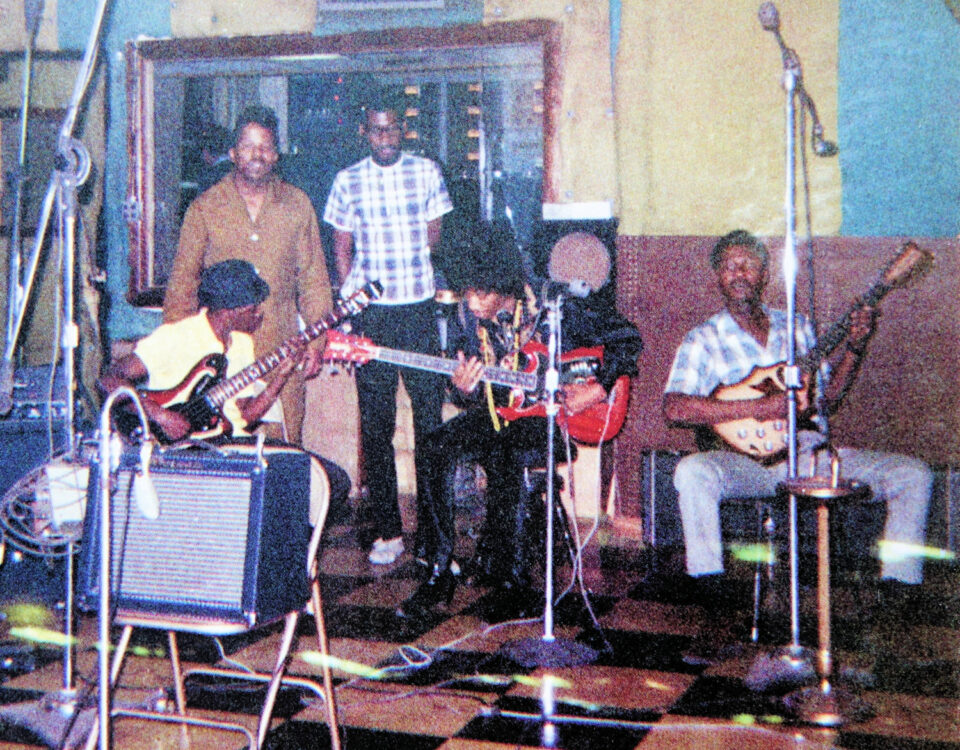 A flamboyantly attired Jimi Hendrix is understandably the center of attention as he returns to Studio 76 on Broadway in New York. Curtis Knight, standing on the left, and PPX head Ed Chalpin could hardly believe their good fortune when Hendrix showed up at the studio not once but twice in the wake of Jimi’s groundbreaking appearance at the Monterey Pop Festival. (Package art from No Business: The PPX Sessions Volume 2)

CHAPTER TWENTY-THREE: BACK ON BROADWAY…